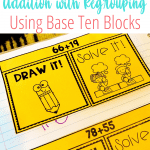 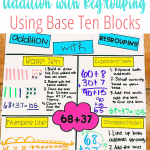 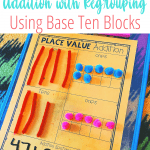 Are you teaching addition with regrouping in your 2nd grade classroom? This is one of the more difficult math concepts for students to master. It can also be challenging to teach. However, using base ten blocks can be a helpful visual tool to make the concept more concrete and easier for your students to understand. Read on to get a sneak peek at my free addition with regrouping lesson plan using base ten blocks and grab your copy below.

Teaching addition with regrouping can be challenging as a teacher, especially if you were taught this concept differently than the way you are expected to teach it now. At the same time, the parents of your students probably learned only the standard algorithm and may not understand why students should be exposed to multiple strategies.

By teaching students multiple addition with regrouping strategies, they’ll have a greater opportunity to succeed and master this concept, as all students learn differently. By having multiple strategies in their toolbox, they’ll be empowered to use the strategy that works best for them.

To learn more about teaching addition with regrouping and to see these activities in action, check out my YouTube video below.

How to Teach Regrouping with Base Ten Blocks

As your students begin to add larger numbers and multiple digits, it’s important for them to understand the concept of regrouping. Regrouping is the process of combining numbers into groups of ten to make adding easier. This requires a strong prerequisite understanding of place value. Using base ten blocks is a powerful visual tool to help students grasp this concept and understand the why behind it.

Before introducing addition with regrouping, students must understand that 10 ones is equivalent to having 1 tens block. If you use my 2nd grade guided math curriculum, your students have already been exposed to this strategy in the Addition and Subtraction Without Regrouping Guided Math Unit.

Before you begin your addition with regrouping unit, it’s important to review the values of ones, tens, and hundreds base ten blocks. Have students practice composing and decomposing various numbers using their base ten blocks.

They can build and model numbers to strengthen their knowledge of place value and give them a solid foundation in which to build regrouping skills on.

Students will also create their own mini version of the addition with regrouping anchor chart to keep in their interactive notebook. Both the anchor chart and the interactive notebook activity will serve as a great reference tools throughout the unit and the year for spiral review. By having students complete their own version, the base ten strategy will become even more concrete as they model it on their own.

To use this activity, give each student their own work mat placed inside of a dry erase sleeve so that they can write the addition problems they’re solving.

Students will solve various examples by writing the addition problem on the work mat and building out both addends using their base ten blocks.

As students solve, prompt them to think about what they already know about adding two-digit numbers. Ask them which place value they should start with. With their prior knowledge, they should know that when adding multi-digit numbers, they should begin adding in the ones place.

As they build their addends on their work mat, they may notice that in some problems, such as 47+36 for example, that when adding the ones place, 7+6=13, which is larger than 10.

When adding, if the number in the ones place is more than 10, students should access prior knowledge to see if they can trade those ones for another set of blocks with an equivalent value.

In this example, they can combine the ones to make a set of 10 ones and exchange it for 1 tens block with 3 ones leftover. Then, the problem becomes 10 tens blocks + 3 ones blocks. Students should skip count to get the sum of 103. You can also have them trade out the 10 tens blocks for a hundreds block if you’d like.

As you introduce this concept and students model different problems on their work mat, it is important to emphasize to students the need to regroup when necessary. Discuss how regrouping affects the place value of the digits and model several examples together so they can work with this concept in a hands-on way. Encourage students to use the base ten blocks to represent the regrouping process and to explain their thinking out loud as they solve the problems.

In addition to using base ten blocks, it’s also important to show students how to draw the base ten strategy using a pencil and paper, as they won’t always have access to manipulatives.

To use this activity, students will read the addition problem. Then, they’ll draw out the problem under the “Draw It” flap to represent the base ten blocks. Students will draw both addends vertically using base ten.

Next, students will add the ones first. If there are 10 ones, they’ll circle them and mark them out using an “X.” They’ll draw another tens block to represent those 10 ones.

To solve, they’ll count by tens and ones to find the sum. Under the “Solve It” flap, they’ll write the addition problem vertically and write the answer.

Overall, teaching addition with regrouping using base ten blocks is an effective way to help students understand place value and the regrouping process in a concrete and visual way.

Using hands-on tools and providing plenty of opportunities for students to practice, model, and discuss will help them master this key math concept without getting overly frustrated.

Inside this addition with regrouping PDF you’ll receive all of the activities shown in this blog post, including the lesson plan, anchor chart template and student interactive notebook version, place value work mat, and Draw It! Solve It! interactive notebook activity.

Just fill out the form below to get this free addition with regrouping lesson plan sent straight to your inbox.

I’d love to know if you grab this freebie and how it goes using it with your students. Leave me a comment below and let me know!

If you’re looking for more support teaching addition and subtraction with regrouping, check out these blog posts and resources.

CHECK OUT THESE REGROUPING RESOURCES!

Be sure to pin this post to come back to it later! 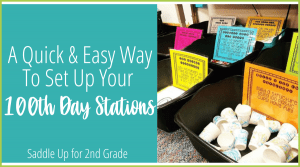 The 100th Day of School is one of my favorite days of the year. Yes, it can be total chaos because of all the excitement, 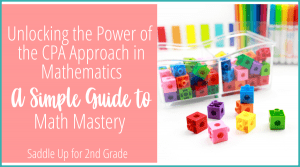 Unlocking the Power of the CPA Approach in Mathematics: A Simple Guide to Math Mastery

What is the CPA approach in mathematics? If this is your first time hearing this term, you’re probably thinking it has something to do with 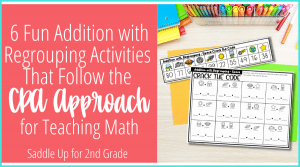 Do you use the CPA approach when teaching mathematical concepts? And no, I’m not talking about accounting or taxes! The CPA approach is a research-based 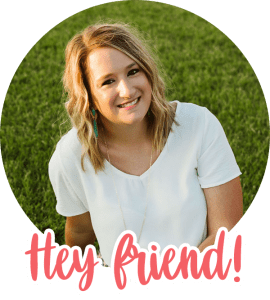 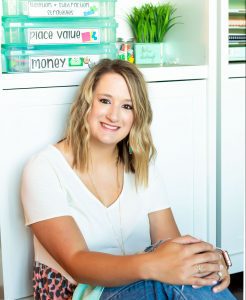